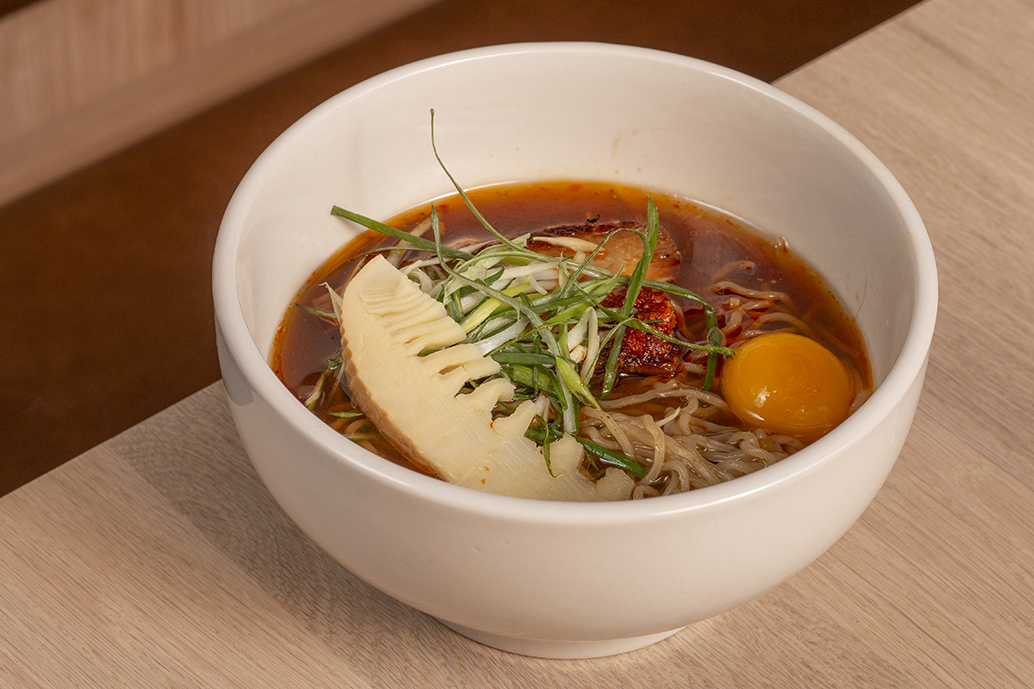 If you search “umami bomb” on Google, you get over 450,000 results. (If you don’t know an umami bomb, you can imagine it—something so savory it makes you wince.) There’s a whole cookbook devoted to it and countless listicles with titles somewhere in the vicinity of “How to pack the most umami into your cooking.” There’s even an article from 2013 we did with Bon Appetit on 5 easy umami boosters. Six years ago this might have been a helpful list. In 2019, everyone’s arrived at the same conclusion.

Have we reached peak umami?

Umami was finally validated in 2001 as a fifth basic taste when two researchers at the University of Miami Medical School successfully identified receptors for it on the tongue. Three years later, at the very first Noodle Bar, we made our dashi with bacon. It was a one-two umami punch. Momofuku was immediately the biggest offender of the umami bomb. But like the other tastes—sweet, sour, bitter, salty—umami did not set out to be so overpowering.

Umami started with one man and one bowl of broth in 1907 in Japan.

Kikunae Ikeda, a chemistry professor at the Imperial University of Tokyo, was enjoying a bowl of his wife’s dashi and noticed something amiss. The broth had a taste he couldn’t identify. He realized the flavor was not distinctly any of the basic tastes he knew. It wasn’t exactly salty, sweet, sour, or bitter. It was something different.

Ikeda set out to identify the taste. He started working with kombu, which he knew was key to making dashi for the broth. After a year of work, Ikeda found that Kombu had significant quantities of glutamic acid, a naturally-occurring essential amino acid. This amino acid was also abundant in other foods that had the same taste.

He had what he felt like was molecular evidence for his theory—if all these foods had this amino acid in common, there must be something there. Ikeda named the new taste “umami,” Japanese for savory or delicious.

As researchers have continued to work with umami in the decades since Ikeda’s first proposition, they discovered umami flavors also appear in foods that are rich in two other acids: inosinic acid and guanylic acid. Here’s a breakdown of what foods have which acids:

The real discovery has been that adding umami-rich ingredients together increases flavor exponentially. So, if you take a food with glutamic  acid and a food with inosinic acid and combine them, you’re not getting double the umami, you’re getting several times the umami. This is how we got to the umami bomb—that miso griddled onion and parmesan cheese sandwich. Layers and layers of umami.

When Ikeda took a sip of his wife’s broth, he probably never imagined it would lead to all the ways we can overload our palates with umami. He just saw it as another taste we can use in cooking. It’s not the silver bullet to make food taste delicious. There are many ways to delicious food, and like in all cooking, it’s actually far better to work towards balance.

A strong argument for this balance is ketchup. In 2004, The New Yorker published a piece by Malcolm Gladwell on ketchup. It was a time when grocery store shelves were crowded with different mustards, but only one flavor ketchup—and specifically Heinz ketchup. Today, Heinz continues to capture far more of the market share than any other brand of ketchup. Gladwell’s argument for its longstanding success is balance of flavor.

Many early 19th-century ketchups were made from unripe tomatoes. They were watery and weak. But a renegade group, led by Henry J. Heinz, thought, why not use ripe tomatoes? The swap increased the percentage of tomato solids, and since tomatoes are rich in umami—it increased umami in ketchup in a huge way. Heinz also increased the vinegar and doubled the sugar, so his ketchup was a lot more sour and sweeter at the same time. He created a sauce that bombarded all five flavors. It hit the tip of the tongue with saltiness and sweetness, moved to the sides where our sour receptors are, and landed in the back where bitterness and umami are perceived.

His ketchup wasn’t only umami—it was everything at once.

Momofuku Seasoned Salt is a starter pack of flavor to take your cooking to the next level, packed with the same umami-rich ingredients we use in our Momofuku restaurant kitchens.