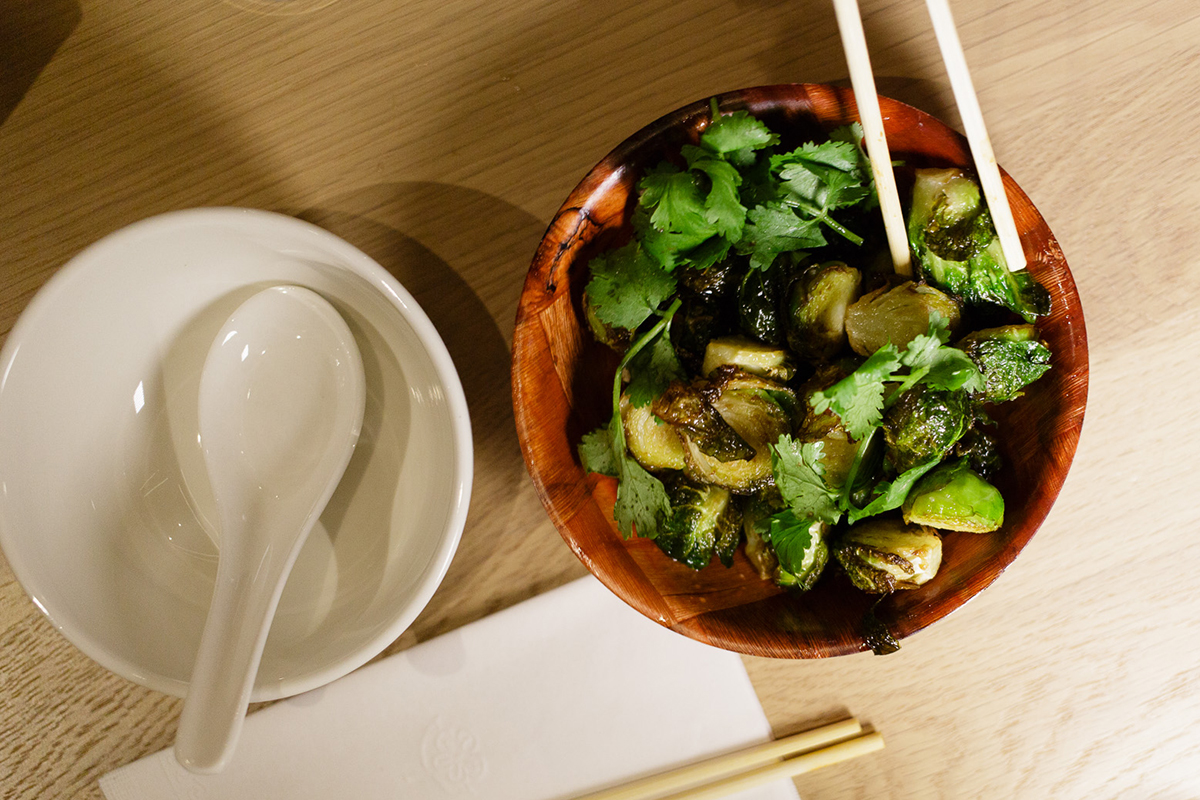 When David Chang first decided to put Brussels sprouts on the menu at Noodle Bar, he didn’t want to add bacon. Every other New American market-driven restaurant in the city at the time was adding bacon and chestnuts to Brussels sprouts.

He tried a couple of things that didn’t work: making kimchi and then pickling and grating them. In the end, it didn’t take long for him to come around to the bacon thing. They decided to roast them off and toss them in some pureed kimchi, like a sauce, because Brussels sprouts, stinky as they are, take really well to the funkiness of kimchi. They added bacon because bacon and Brussels sprouts just go together. It was good, but it looked not-good. So they put a big bright pile of julienned carrots on top to give it some color, and away we went.

The combination of the flavors from the smoky bacon and the tangy fish sauce-packed kimchi give this dish layers of umami. It’s balanced by the freshness of the carrots and the bitter char on the Brussels sprouts.

Remove and discard the loose outer leaves from the sprouts, and cut the sprouts in half through the core.

Put the bacon in a wide oven-safe sauté pan or skillet and cook over medium heat, stirring occasionally, until just about crisp, 5 minutes or so. With a slotted spoon, transfer the bacon to a paper towel-lined plate and reserve.

Drain off most of the fat from the pan and add the sprouts, cut side down. Raise the heat to medium-high and sear until the sprouts begin to sizzle. Put the skillet in the oven and roast until the sprouts are deeply browned, 8 minutes or so, then shake the pan to redistribute them. Pull the pan from the oven when the sprouts are bright green and fairly tender (taste to check), 10 to 15 minutes more.

Return the pan to the stovetop over medium heat and stir in the butter, bacon, and salt and pepper to taste. Toss the sprouts to coat them.

Divide the Kimchi among four shallow bowls. Use the back of a spoon to spread the kimchi out so it covers the bottom of the bowls. Divide the sprouts among the bowls, arranging them in a tidy pile on top of the kimchi. Garnish each with a pile of carrot julienne and serve.