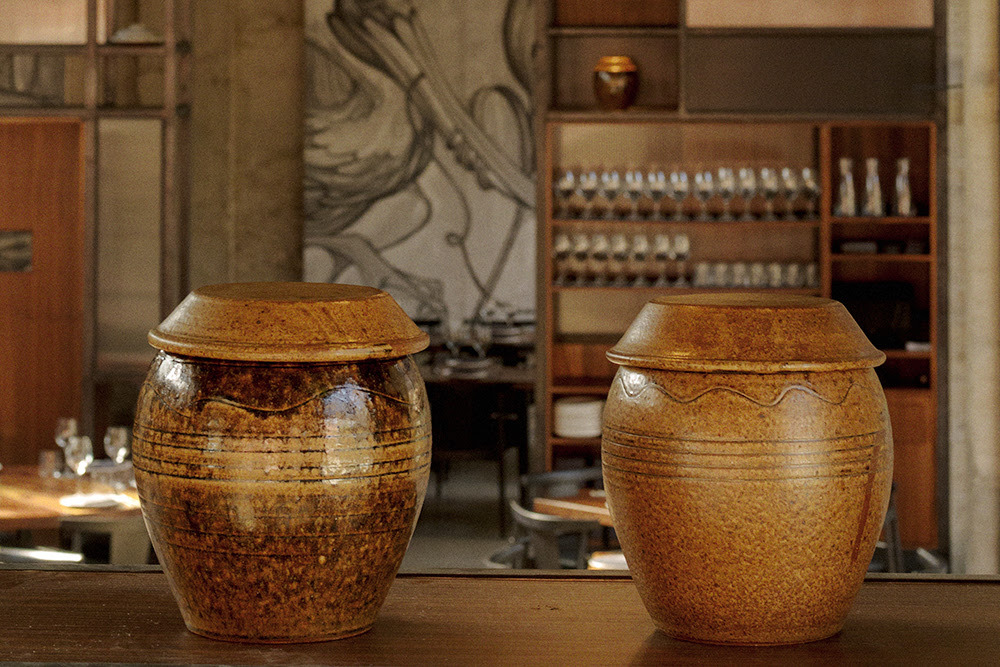 At Majordōmo, we’re proud to feature onggi, traditional Korean earthenware jars used for making fermented foods, such as kimchi, gochujang, and makgeolli. The history of onggi stretches back 5000 years—long before the days of glass and plastics, long before grocery store shelves and refrigeration, long before a time when people thought about moving into high-rise buildings, saving space, and simplifying life.

Nothing about making onggi is simple. Nine years years ago, when Adam Field, the potter who made our onggi, went to Korea to start an onggi apprenticeship under a sixth-generation master, the master had only one thing to say to him: “It’s going to be hard.” And it was hard. It was the most most physically and mentally challenging year of Adam’s life. Even now, he still does not consider himself a master.

But he’s found that making onggi still makes him feel a part of the tradition―of the long line of history and food history that stretches from thousands of years ago to today. Only today, tradition is a fading line. Adam chatted with us about his work at Majordōmo and about what’s happening to the art of onggi-making now that all these fermented foods are being produced by factories.

What is the perception of onggi in Korea?
To be quite frank, many people consider onggi the bottom rung on the ladder of all the pottery traditions. I don’t gain any favor with academically trained Korean potters by mentioning that I did this apprenticeship. They wonder why I wasted my time doing it.

Are you wasting your time?
[Laughs] Onggi-making is so tied to tradition, specifically food tradition that it’s important to me―to everyone. In Korea, food and all these peripheral traditions around it are a living museum. That history is so invaluable. I feel like Koreans tend to be fiercely nationalist, in the best sense of the word. They have such pride for Korean traditions.

But then when plastic and glass and metals came in, people thought―great, these are cheaper and easier than this old tradition. Let’s start fermenting in these. Of course, then, with that convenience they lost some of the functionality of the pots because that breathability actually encourages a very vibrant and healthy ferment. I’m not saying that you can’t ferment in those other materials.

It’s just not as good.
Right, and when people made the move to high-rise living in the 70s and 80s, onggi production really died off pretty heavily. But now, it’s finally started to come back around.

Now, it’s companies who are buying them. When I was in Korea, we used to make these 45 gallon vessels to sell to companies who would use them to ferment en masse and package for commercial resale. We’re talking about plastic containers on the shelves in the grocery stores that have a label that says that this product was made in a traditional handmade onggi jar.

So, that’s the new place for these jars. Instead of a small patio in a small village, they’re being rethought of as a pantry item.

You seem really interested in how pottery helps you interact with history.
To be frank, there’s no practical reason to make pottery by hand anymore. That game is over, like 100 years ago. So, I’ve been forced to think―why am I making pots by hand? There is something special about it, and there is something different about it. Sometimes the best path to a well functioning pot is the handmade route.

I’m hopelessly sentimental. When I see these objects, they remind me of these times in the past. I really kind of revel in that, whether that time is my lifetime or a lot further back than that.

How do you see your role in this history then?
I think about it this way. When I go to a museum, I look at an amphora―one of those old Greek or Roman jars with the two handles―that is thousands of years old. And when I peer down inside it, I can see this thing that goes on in the clay, when the neck gets squeezed from the outside as the pot is spinning. There’s a spiral that happens, and almost every potter knows that.

One individual made that pot thousands and thousands of years ago, and I think that gets somehow to the root of what is really exciting to me―continuation of lineage but also connection with individuals way back into the past. It’s like those handprints in caves in France. Somebody put their hand up there and spit a pigment, and that’s one person, however many thousands of years ago.

And pottery gets you closer to food as well, which I know is an interest of yours?
If I’m going to be making pots, there has to be this strong connection between something being made thoughtfully by hand with very specific intention for its use. Of course in the case of onggi, that was a perfect fit because not only is there an extremely specific use, but it is also a use that has been gradually evolving through the back and forth of a very small feedback loop in Korea.

You make the jar. Somebody makes kimchi in it the next week. Then, they say, oh it would be really nice if it was different in this way. Then, you make it again.

How does Momofuku fit in here?
I remember sitting in Noodle Bar five years ago with some friends. I was explaining to them how I was going to work with David Chang at some point. And I had nothing then―no “in” whatsoever, no plan.

I guess I think that David, more than a lot of other people, is taking vernacular and really highlighting the fact that it is actually something that is worth taking a really strong look at. It’s the same way that I looked at onggi―and noticed the people who looked down their noses at this ancient tradition.

There’s a lot of value in tradition, in history. There’s a lot to be learned from it. It hasn’t been around for thousands and thousands of years for no reason at all.