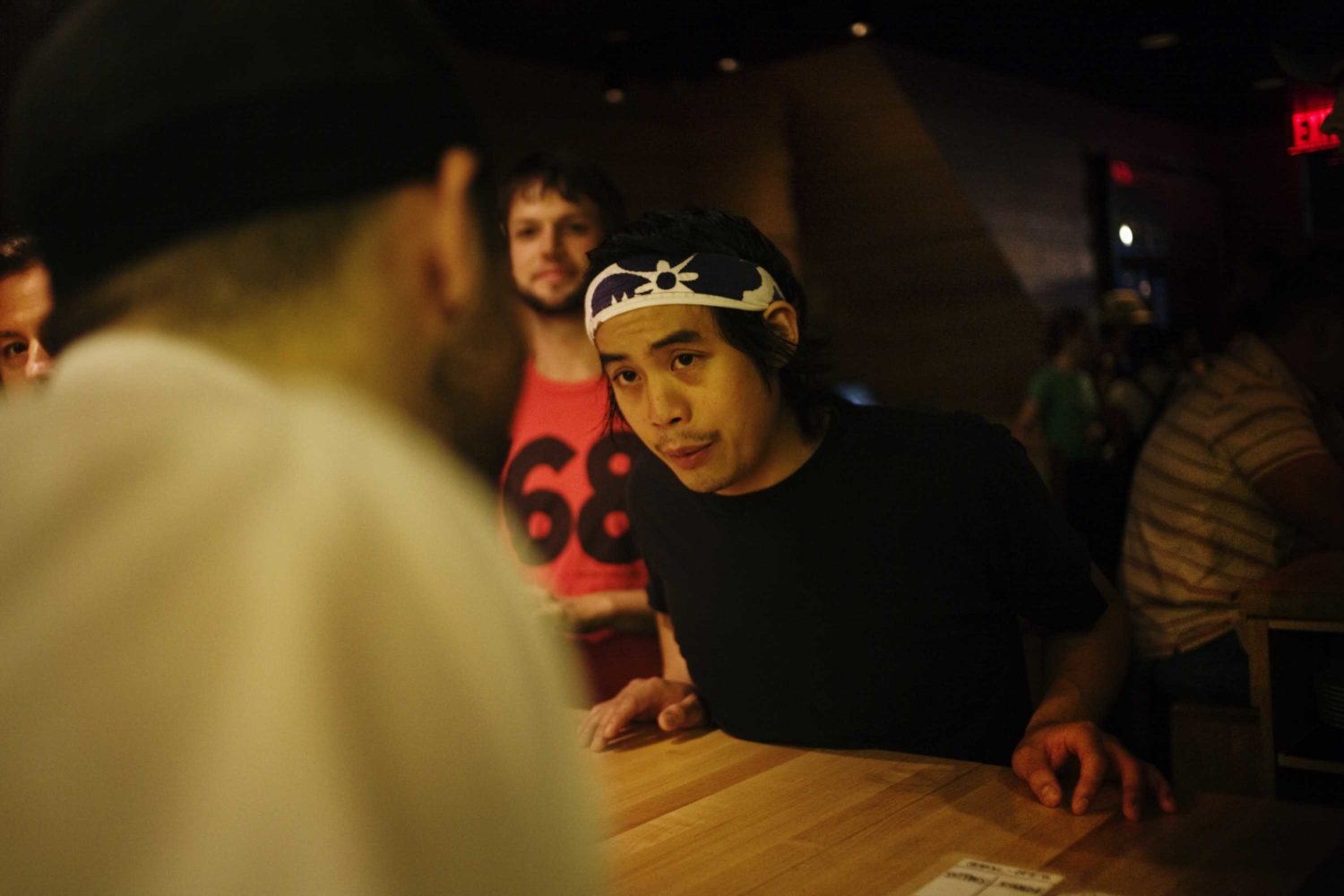 Around 4:00 pm a few Wednesdays back, Eugene Lee was huddled over the lid to the slushie machine. The light had stopped working. It wasn’t clear why. He was trying to wedge in a screw that wasn’t fitting. He didn’t look up from his work.

Eugene, who has been with Noodle Bar for fourteen years and now serves as the general manager in the East Village, never stops moving. He’s always onto the next project. Though he might not say it, over the years, this place has come to feel like home for him. And like any home, there’s always another thing that needs fixing. If you stop moving, you stop getting better. Under Eugene’s eye, even after 15 years, Noodle Bar is always working to be better every single day.

Are we going to get started or just sit here and listen to each other be silent? He said, still not looking up. We got started.

How did you first find Noodle Bar?
I started eating at Noodle Bar almost 7 months before I started working here. It was around when the 25 and Under review came out. Back then, I would sometimes eat here twice a week. I remember I asked one of my coworkers at the time which ramen restaurants she recommended going to. I had never had ramen in a restaurant at that point.

Noodle Bar was one out of the ten on her list, but it was the closest to where I lived. So that’s where I went. I sat facing the wall. I was not that impressed. I thought the pork buns were not that good. But then everything was suddenly redeemed by these freshly shelled peas that were in the ramen. Back then, in the spring and summer, we used to add freshly shelled peas from the greenmarket to our ramen.

What do you remember about those early days?
The food was amazing.

Besides that.
The original broth reminded me of my grandmother’s turtle soup. You don’t want to know what’s actually in turtle soup.

We want to know.
[Shakes head] You take a softshell turtle, and because I lived in Oregon we couldn’t get them, so we would have to go all the way down to San Francisco Chinatown to get them. It was my favorite thing my grandmother made. There was elk meat in it too, chinese herbs, and yes, turtle. I remember I ate it for many years, and then one day when I was 7 or 8, I walked into the kitchen of my parent’s restaurant and on the ground was a wooden crate with slats in it. It contained one large soft shell turtle. I always thought turtle soup was a euphemism, but no. It was real turtle. The flavor combinations and how everything melded together in the Momofuku ramen back then took me to this turtle soup.

What’s made you stay?
The food?

Nothing else?
I think this company and Dave have taught me everything I know about food on a professional level. The only other people I credit that to are my grandmother and my father.

I’ve always liked really shitty food. I still like really shitty food. I still only eat the same five things. A lot of noodles. I don’t like variety, I like consistency. I want to know what I am eating, know that I will enjoy it, know the shortcomings of the restaurant, the elements of the dish that are shitty, and that’s it. As long as I acknowledge those things, that’s all that matters. I’m not looking for the perfect thing. I don’t like new trendy restaurants. But I guess I understand what goes into them.

How do you use this at Noodle Bar?
Nothing is ever a yes, it’s always an evolution. Everyone tastes new dishes together and then we continue to taste and give our feedback, and make adjustments and tweaks. Even once something’s on the menu, there are adjustments that are made. Based on guest feedback, observing people eating, we make adjustments accordingly. The key to all of this is that a lot of things just don’t make it to the menu, not because of a lack of effort. Sometimes things just taste like shit.

But the process is much more collaborative now. Not to say that it never was, but beforehand it was very back of house focused. The front of house had no contribution to anything—nor do I think we knew enough to really contribute back then. At this point though, I feel like it’s a unified effort from front to back. We realized all feedback, regardless of its source and regardless of its delivery, has some truth to it. You can decide to listen to it or not, or incorporate it or not. It’s just a matter of accepting that truth for what it is.

What else has changed since the early days?
Everything. I know this has been said a lot, but we were uncompromising in our opinions and our views then. No substitutions, no vegetarians. We were arrogant and brash, and we didn’t take into consideration anything else. We thought what we cared about mattered the most. The biggest difference between what we were then and what we are now is just having general empathy for everyone and everything. We’re always trying to understand the other side of it. We’re still not perfect, but we’re trying. That’s what’s important.

I think the biggest mistakes we’ve made as a company, and I’ve made as an individual, have helped me grow and learn. There’s always things you could change but I wouldn’t be who I am now without them.

Do you think the changes have been good?
Sure, why not. Who am I to say? I work at a restaurant. This place is like a family. Sometimes you hate the people, but mostly you love them.