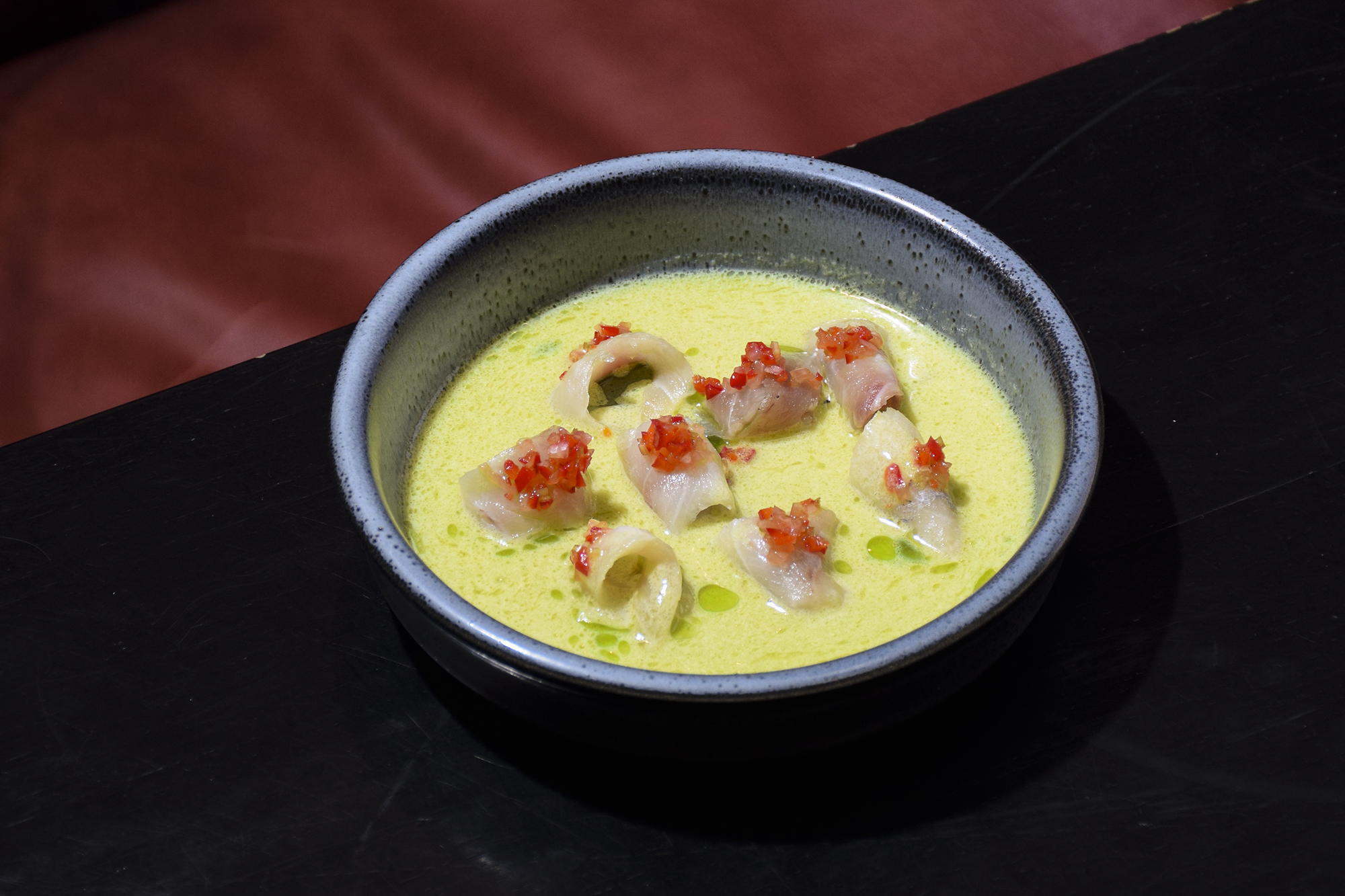 As Chef Eva Chin, the new Chef de Cuisine at Kōjin in Toronto, works to bring new dishes to the menu, one of her big goals is to represent her hapa heritage. She started with a dish she knew from her deep-seated childhood memories in Hawaii: the Kanpachi Ceviche.

A couple of years back, Eva swam in the deep open ocean waters off the coast of Kona with a school of Hawaiian kanpachi. This ocean-raised fish farm is bred by Blue Ocean Mariculture.

Kanpachi is available year-round and is one of her favourite versatile and sustainably-farmed fishes. At the farm, marine biologists specialize the fish’s feed and have one of the most sophisticated hatchery systems in the United States. They’re approved by Seafood Watch, the governing body helping businesses and consumers identify seafood that’s raised in non-hostile environments.

For Eva, kanpachi is both a lean and fatty fish at the same time. “When you see fish like this it’s a sign for the future.” Why? “Sustainability. Health-wise, it’s also a huge source of Omega-3 fatty acids and protein. It’s GMO-free. It’s organically grown in deep sea clear water. That is the future of our fisheries because if you think about it, how much fish can be fished in Hawaii?” For this reason, she’s been supporting Blue Ocean Mariculture since they opened in 2009. 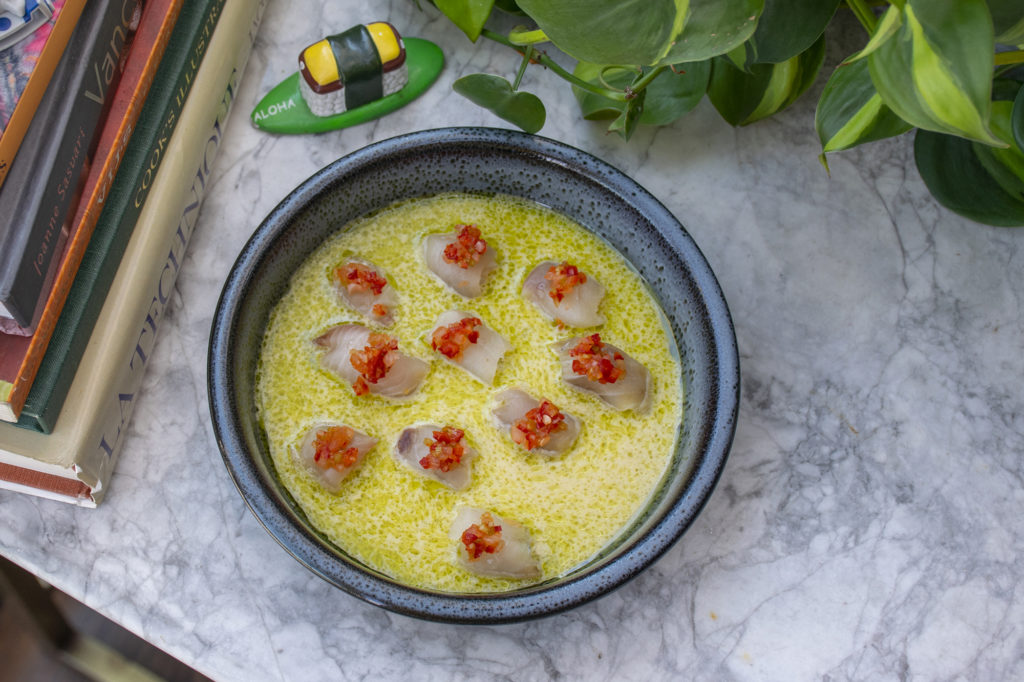 Her love for Hawaiian kanpachi inspired her wherever she’s cooked. In her career, she’s served a variety of different kanpachi dishes. She’s served a version where the fish was laid out with sorrel vinaigrette, sea asparagus, local coastal vegetables, and a salted coconut ice cream. Another time, she tried a kanpachi that was glazed with a coconut glaçage, sea buckthorn berries, cilantro verde, and a fishbone reduction.

At Kōjin, she wanted to recreate the childhood memories on her uncle’s fishing boats. On one trip, his Hawaiian-Filipino spear fishers introduced her to kinilaw—a widely-eaten fish ceviche. She would watch them filet the fish right out of the ocean. In front of her, they doused it with coconut milk, coconut vinegar, coconut water, chopped fresh chilies, and sweet Hawaiian maui onions. When they served it to her fresh, her palette was alive. The fish was buttery, and it tasted like the sea in the most refreshing way, with the sweetness of coconut to balance it all out. It just made sense in that moment.

When she explored her Samoan heritage more, she learned that they have the same version called oka’ia. It turns out coconut milk tossed on fresh fish right out of the water was very common in other Pacific Islands. 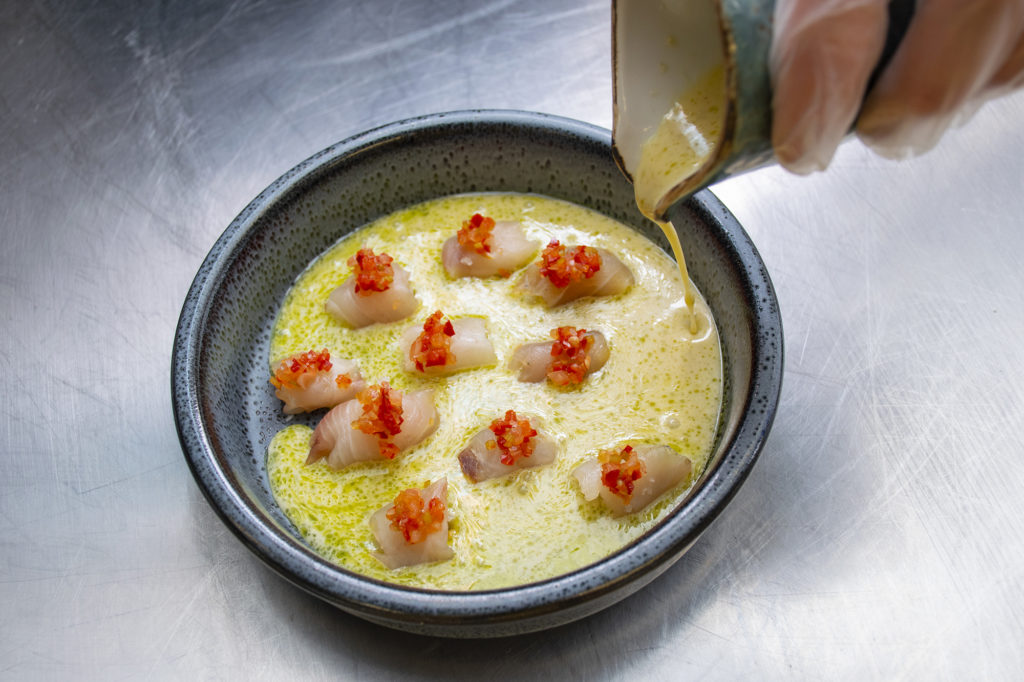 “I feel like now I’m able to serve it in its own true form and simplicity.” It’s just three steps: fish, salsa, and sauce.

For Eva, Hawaiian kanpachi represents the future of fishing. Seeing how fish farming is impacting her own uncle’s business today makes her sad. But as she says, “Kanpachi gives me hope.” Maybe this can impact the farming of other fish like mahi mahi, marlin, swordfish, tuna, and many others.

In terms of what Kanpachi Ceviche means for Eva at Kōjin? “It represents where I’ve been, who I’ve become, and where I want to go.”

Book a reservation at Kōjin.