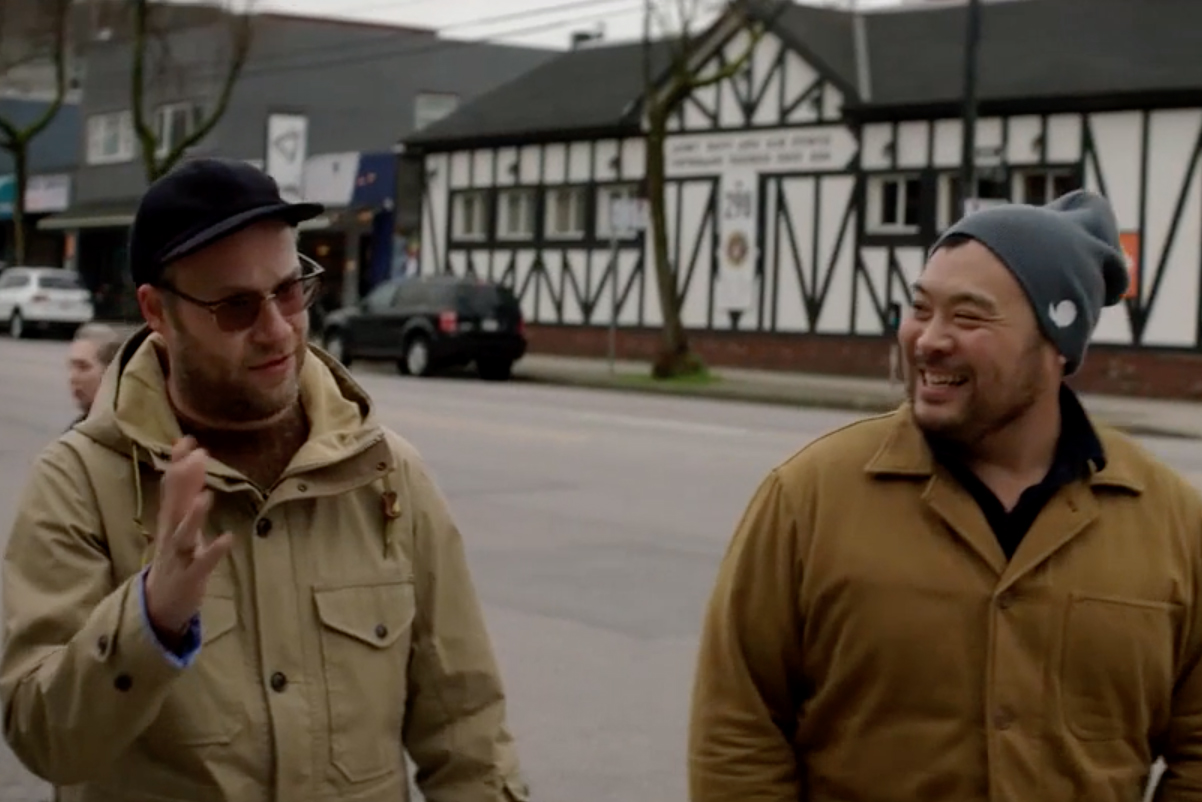 The first time it occurred to Seth that Vancouver had a great diversity of food was when he was a kid watching the Breakfast Club. “Molly Ringwald’s character was eating sushi, and everyone looked at her like she was an alien,” says Seth. “I remember me and my sister were like, ‘What’s wrong with that? Everyone eats sushi.’” Vancouver is a place where a mix of different people and food come together.

“The city is like, hugely multicultural,” Seth says as he picks up Dave to begin their day, “and because of that the food is amazing.” After a quick stop in Queen Elizabeth Park and their first hit of the day, Seth and Dave head straight for Granville Island Public Market for Lee’s Donuts. The jelly donut “might be the best thing I have ever tasted,” says Dave.

They head out on a boat to try fishing for Chinook salmon and Dungeness crab. For lunch, Dave and Seth drive over to Sun Sui Wah Seafood Restaurant, a Cantonese dim sum staple, where they talk about what it means to have mainstream success and pursue what you love—and the fact that making food is not that different from making movies. “What I’ve always thought a good creative challenge was how do I take the weirdest ideas and make them palatable to the most people,” says Seth.

For dinner, Seth and Dave leave Vancouver for Richmond, a suburb where there are “a fuck-ton of Asian restaurants,” says Seth, and “they are all incredible.” They drive into the back of a parking garage to HK BBQ Master for Hong Kong-style honey BBQ pork, crispy roasted pork, soy chicken, and roasted duck. It’s an old-school Cantonese spot that has been in the same family for 19 years, and the son is in the process of taking over.

He’s unique—not all the younger generations are taking over the family businesses. “Chinese cooking is considered a lower class kind of food. It’s a messy job,” he says. But for him, and like so many other people in Vancouver, it speaks to their culture, and all the things his parents brought directly with them from Hong Kong. It’ll always be “part religion.”

Granville Island Public Market
1669 Johnston St, Vancouver, BC V6H 3R9, Canada
It’s a culinary wonderland of the freshest products from the ocean, fields, and oven. Dave and Seth pick up a mangosteen at one of the fruit vendors, which is originally from Southeast Asia but grows in tropical climates. They grab three different donuts from Lee’s, including jelly, which Dave thinks is one of the world’s great foods.

Sun Sui Wah
3888 Main St, Vancouver, BC V5V 3N9, Canada
This staple of the Vancouver Chinese food scene has been serving up dim sum, fresh seafood, and an array of other delicious plates for over 30 years. They order many dumplings, some chicken feet, and roasted squab.

Apna Bhaia Sweet Shop and Restaurant
6616 Fraser St, Vancouver, BC V5X 3T5, Canada
It’s a hole in the wall, but it has some of the best samosas or sweets in Vancouver. Dave and Seth grab a couple of fresh samosas and sit outside on the bench.

HK BBQ Master (Temporarily Closed)
4651 No 3 Rd, Richmond, BC V6X 2C4, Canada
Run by Eric Leung and his son Anson, this small spot is in the back of a parking garage. They order the BBQ pork, duck, and soy chicken.

Queen Elizabeth Park
4600 Cambie St, Vancouver, BC V5Z 2Z1, Canada
The highest point in Vancouver, you’ll get incredible views of the ocean and the mountains along the north shore.

Bon Chovy Chartered Fishing
1814 Mast Tower Rd, Vancouver, BC V6H 4B6, Canada
Catch some of the Pacific Northwest’s best seafood, like Dungeness Crab or Chinook Salmon. Seth and Dave don’t have a ton of luck with salmon, but they do manage to nab a few crabs in the basket.

VanDusen Botanical Gardens
5251 Oak St, Vancouver, BC V6M 4H1, Canada
This 55-acre garden is located in the heart of Vancouver is home to over 7,500 species from around the world. Dave and Seth spend their time there getting lost in the massive hedge maze.

Vancouver Aquarium
845 Avison Way, Vancouver, BC V6G 3E2, Canada
Besides some highly impressive jellyfish tanks—Seth’s thinking about one for his home—the aquarium has an octopus named Ceph Rogan.

“I don’t like to share compliments I’ve been given but Snoop Dogg told me I’m the best joint roller he’s ever met in his entire life.” – Seth

“The one time I remember as a kid it was strange that I grew up in a city with a lot of ethnic food was in the movie the Breakfast Club when Mollie Ringwald’s character is eating sushi and everyone is looking at her like she is a fucking alien. And I remember me and my sister were like, ‘What’s wrong with that? Everyone eats sushi.” – Seth

“What I’ve always thought a good creative challenge was how do I take the weirdest ideas and make them palatable to the most people. Like Pineapple Express, we are making a weed action movie, people are like, ‘that’s stupid.’ But that’s the creative challenge, turning it into something that seems second nature.” – Seth

“That tells you everything you need to know about Vancouver right there.” – Dave commenting on the abundance of wok rooms in Vancouver homes.

“I am just thinking about how it was very clear to me that how I was raised was not how people were raised that were around me. And I knew that early on even in school when people would come over, whether it was my brother’s friends or my friends that were like, ‘wow it smells terrible in here.’I don’t want to eat this food, I am going to make fun of you now.” – Dave

“I had Indian friends growing up and I have such an early memory of going to a friend’s house and they were making chapatis which inflate like pillows on the stove. It was so fascinating to me, it did smell fucking crazy, but no part of me thought ‘you mock this.’” – Seth

“Growing up my Mom was a tremendous cook… the only time we didn’t want to eat her food was because we didn’t think it was cool.”  – Dave