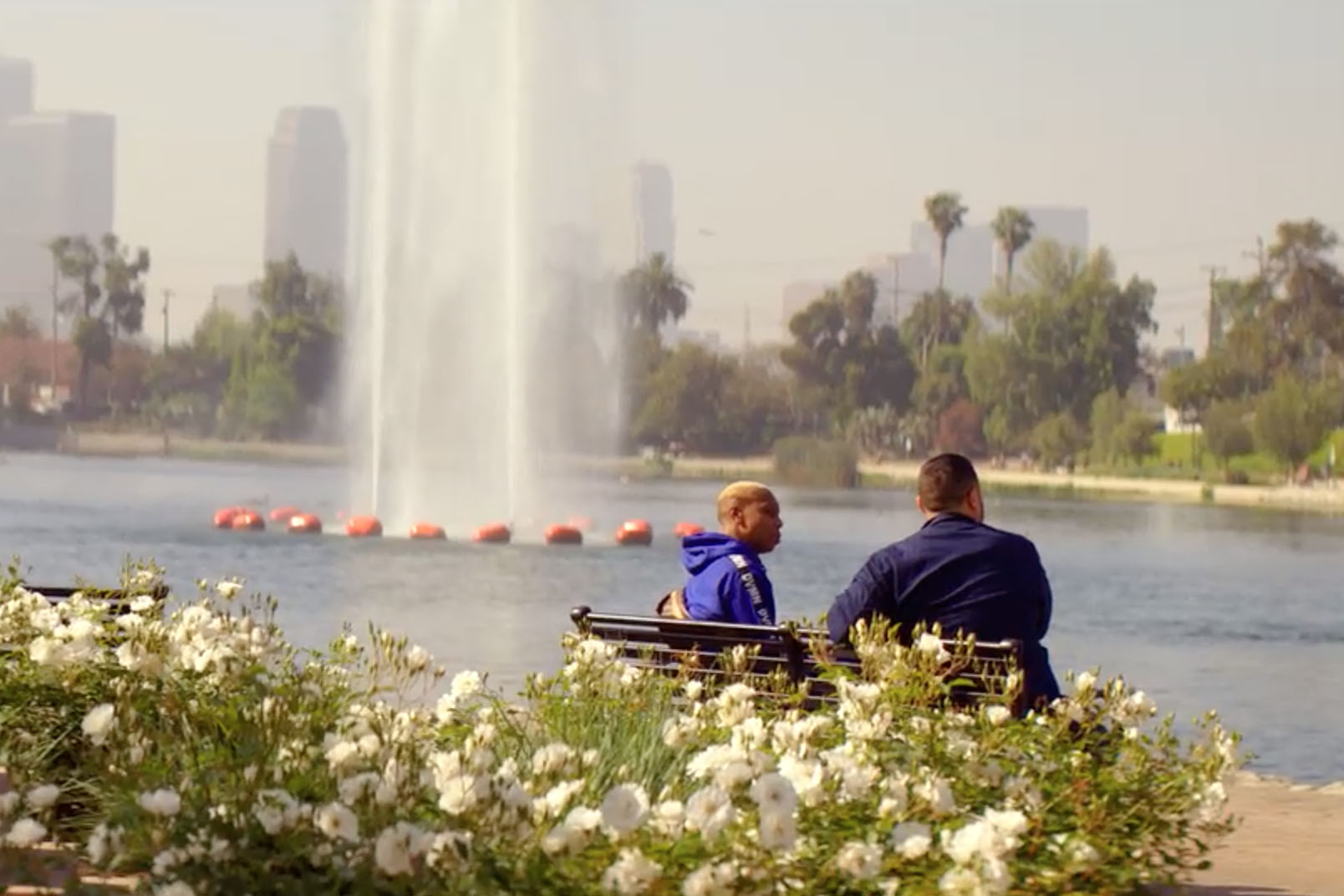 As Dave explores LA with screenwriter, actor, and producer Lena Waithe in Episode 3 of Breakfast, Lunch & Dinner, they unpack how different the city can be for the people who call it home.

Dave’s spent a lot of time in LA, but he’s never been to the beach. Koreatown is his “city.”

He meets up with Lena in her “city,” Echo Park, where she lives with her fiancée. It’s an area she describes as idyllic—people don’t realize that a place like it exists in LA. Lena explains that Los Angeles has many such pockets. She mentions the late LA rapper Nipsey Hustle who said, “the thing about LA is in one drive, from one corner to the other,” you go from one world to an entirely different one.

The episode focuses on nostalgia—Dave and Lena visit Amoeba Music, a Hollywood music store with a large selection of LPs. They go to Round Two, a vintage clothing store.

For both of them, memories influence their present interests.

Food is also very nostalgic for Lena. She takes Dave to a seafood restaurant called Hot N Juicy in West Hollywood. She recalls how when growing up in Chicago, Red Lobster was where you would go to celebrate big life events. Hot N Juicy takes her back to those fond memories.

In the afternoon, Dave takes Lena to Gardena, a suburb of Los Angeles that has the largest population of Japanese-Americans outside of Honolulu. It’s a pocket of the city that Dave knows Lena’s never been to. They visit Dave’s spots: Gardena Bowl Coffee Shop and Chikara Mochi, before ending their day at Otafuku, a Japanese restaurant that Dave claims is a perfect representation of Gardena. It’s places like this for Dave that make Los Angeles what it is—for him, you don’t have to go to the beach if you have Otafuku.

Chikara Mochi
16108 S Western Ave, Gardena, CA 90247
Hand-made artisan mochi with fillings from red bean to peanut butter. They both pick up mochi for their partners.

Amoeba Music
6400 Sunset Blvd, Los Angeles, CA 90028
Music store with a huge selection of CDs, records, and DVDs. Guaranteed that you’ll come across that artist you haven’t listened to since you were fifteen.

Sun Nails
2616 Sunset Blvd, Los Angeles, CA 90026
Lena’s go-to nail salon in Echo Park. Like Dave and Lena, you too can get your nails buffed and shined.

“I like giving dope artists who I think are more interesting than me a platform to carry on the legacy of stories/narratives by black people about black people. We are some resilient motherfuckers, I think because you have to be to survive the middle passage, then to come over here and work for free and still contribute to a country that doesn’t love you back…That’s what we do with tragedy we make it beautiful.” – Lena

“I think LA right now holds the crown for celebrating diversity and representation through its food more than any place in America.” – Dave

“I feel like it’s more than a music store, it’s a place you can go to feel safe, to feel nostalgic, you can come in here to get inspired” – Lena on Amoeba Records.

“I love LA because there is still a sense of discovery, the things that even the critics or the blogs don’t know.” – Dave

“LA is a foreign land not only to tourists. Angelinos don’t know so much about their own city. My LA is like a lot of people’s LA, it’s the LA they are most comfortable with. My LA is Koreatown.” – Dave

“You don’t think of this as fusion,” (pointing at eel tempura)” but everything is fusion. Tempura is wheat flour that came from the Portuguese.” – Dave