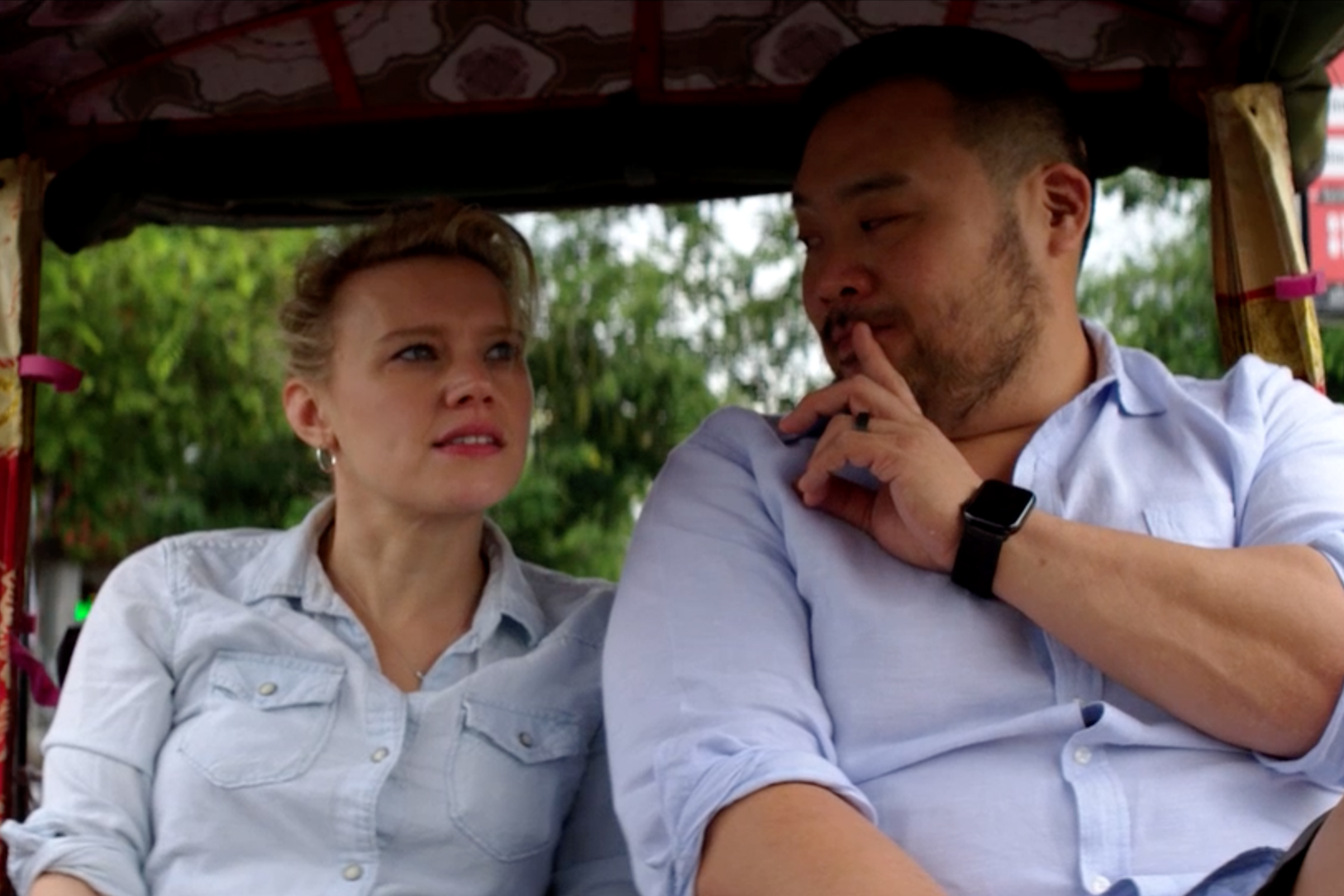 In Episode 4 of Breakfast, Lunch & Dinner, Dave and writer, actor, and comedian Kate McKinnon explore the beauty of Phnom Penh and food that come out of hardship.

They start at mountaintop temple Phnom Chisor, an 11th century temple that was significantly damaged during the Khmer Rouge regime. You can’t understand eating in Cambodia without understanding this regime and the four-year stretch from 1975 to 1979 when they ruled the country. There were massive food shortages and widespread famine—at times, there was no electricity or refrigeration. The country had to think differently about the way it cooked. Food was preserved instead of made fresh. Fresh herbs were revived as a part of culture because they became one of the main ways to add flavor.

Kate and Dave return from the temples and head directly to the central market, Phsar Thmei. There, they eat traditional Cambodian dishes like garlic grilled prawns and fresh river fish. (Kate’s a vegetarian, but she makes some exceptions.)

For dinner, they go to Chef Luu Meng’s Restaurant, Malis, where they learn more about how old Cambodian cuisine fits in with the type of food people learned to make during the Khmer Rouge regime. Malis tries to cook food that speaks to both food traditions and looks forward, finding ways for these two traditions to merge.

The next day, over lunch with Cambodian  activist and filmmaker Kulikar Sotho, Dave and Kate continue to learn how the war and genocide have had a lasting impact on Cambodia’s food and culture. From there, they head to Prumsodun Ok, Cambodia’s first dance company that supports the LGBTQ community. Many Cambodians are “stuck in the past,” says Sotho. But organizations like this dance company show how Cambodian people are at last moving on from some of their troubled history.

The day winds down with a boat ride down the Mekong, as Kate and Dave reflect on the trip and what they’ve learned about the country. “Learning how to cook something delicious out of nothing, that’s cooking, right?” Dave says.

Other must-try dishes in Cambodia: During their time in Cambodia, they also try boat noodles, fish amok, morning glories with garlic, and chicken with ginger.

Phnom Chisor
the E, Stairway of Chiso Mountain from, Cambodia
Hike up the 435-foot mountain to explore this beautiful temple and its surrounding views. Though once devoted to Hindu deities, the temple is now a place of worship for Buddhists and a home for young monks.

Wat Phnom
Located Inside the Wat Phnom Roundabout, across from the U.S embassy
It’s almost impossible to miss this temple which gives the city its name. Leave alms or receive a monks blessing for good luck and fortune.

“I like countries where there is no cohesive American conception of what is there.” – Kate, on why she chose Cambodia.

“Cambodia is one of the few occasions for me where I want authenticity. It’s so important to me that it gets preserved, that there is a light shined on it, that people know about it, it’s cherished, we are stoking this fire and it’s going to continue to burn bright. It’s the other version [of authenticity] where people are preserving something so that it doesn’t die and it kills everything else, that’s the shit that drives me crazy.” – Dave

“You know what I was really not expecting was Cambodian food really defining itself during the war… If you have bounty then you are just going to take the best and merge it with the best. So there is no need for innovation… In cooking you have to make family meal for the staff. It’s not like you are cutting into the prime meat or the finest fish. Often times you are getting scraps and learning to make something delicious out of nothing. That’s cooking.” – Dave, on the emergence of modern Cambodian Cuisine

“The point of happiness is to make other people happy. Like how you can make people laugh or for me it’s through some type of food or service.” – Dave

“Something great can only come out of something that is in equal opposition.” – Dave, on creating triumph out of tribulation.

“I was going to say the best part of traveling is eating but I think that’s wrong. It’s the conversations that you have with the people that you meet whose lives are so impossibly different than your own.” – Kate