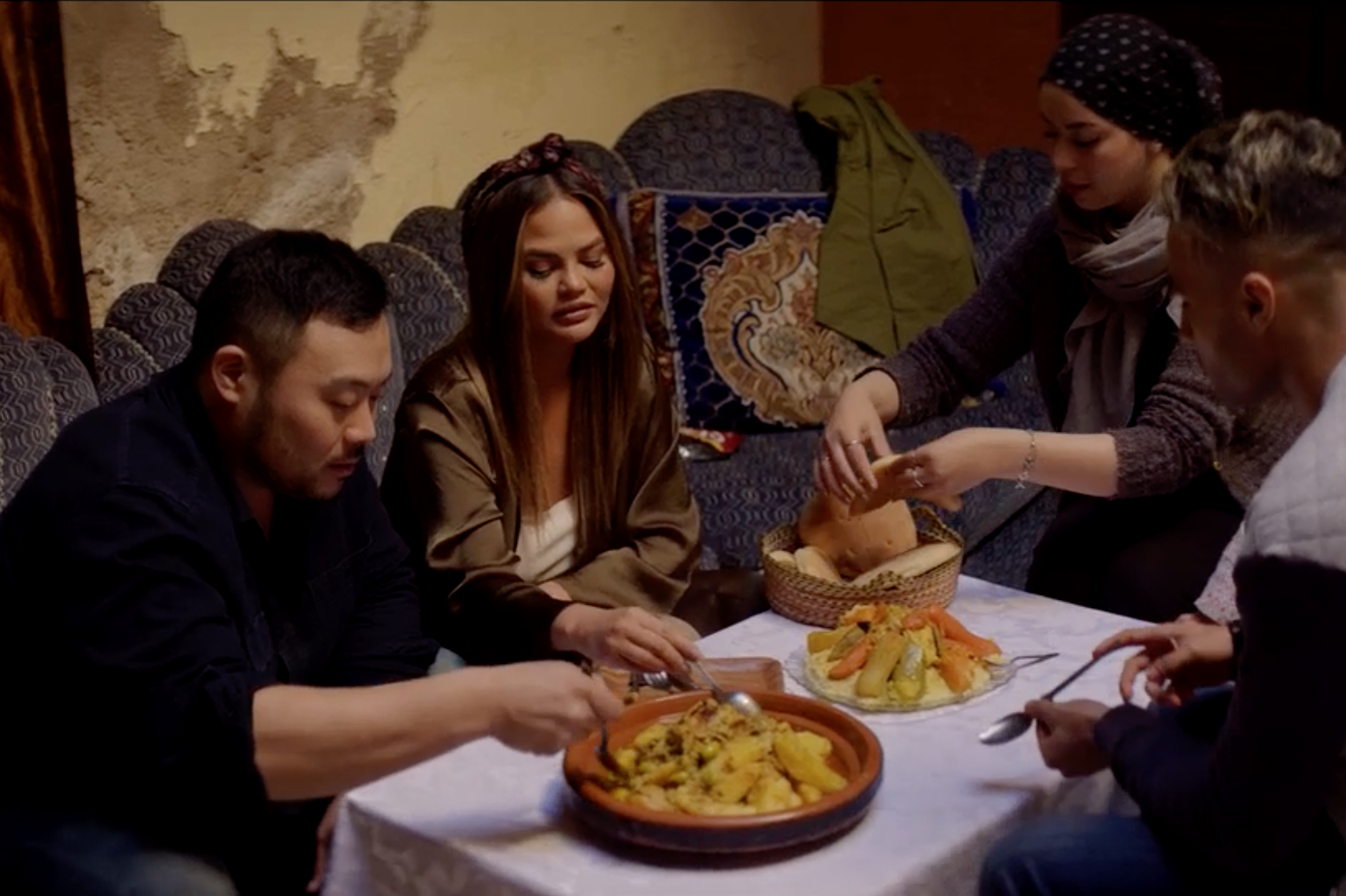 Dave meets up with his friend Chrissy Teigen in Episode 2 of Breakfast, Lunch & Dinner to explore the streets of Marrakesh and unpack all the cultures that come together in Morocco.

A lot of people know Morocco because of movies like Casablanca or Lawrence of Arabia. Casablanca is more of a metropolis now than it was then, but Marrakesh is still preserved. During their first day, Chrissy and Dave sit down with a local guide at the belle epoque Le Grande Cafe de La Poste, who takes them through the history of Morocco. It involves a lot of different people—Phoenecians, Romans, Jews, Arabs, Portuguese, Spanish, French, and more—over a lot of different centuries.

Chrissy has been to Marrakesh a few times, but it’s Dave’s first visit. They start their day with a traditional Moroccan breakfast in their riad. It’s a spread that includes tagine, broad bean soup, and lots of different breads. They then head to the Medina to Chez Lamine, a local food stall where whole lambs are roasted in a large underground pit oven.

A lot of the best eating in Morocco happens at home. “It’s not a restaurant culture here,” says Dave. For dinner, they head to the home of local chef Tarik Amar, who prepares chicken tagine and couscous with his family for Dave and Chrissy. Spending time at home with Tarik and his family reminds David of his wife Grace back home, who is at the time expecting their son, Hugo. “It’s the first time in my life I’ve genuinely felt homesick,” Dave admits to Chrissy.

On their final day, Dave and Chrissy head into the desert to ride camels and enjoy Morrocan mint tea while overlooking the Atlas Mountains. As they drive back into the city for a final meal of Harira, a traditional spicy vegetable soup, and Chebakia, sesame cookies, Dave reflects on his time in Marrakech. It really is a city where so many different influences come together. “I have an affinity for places with a complex history,” he says. “Everything here has a story behind it and over time it evolved into this thing that is beautiful.”

Riad Guest House
A riad is a traditional Morrocan home, often built around a central courtyard. Chrissy and Dave start their day here with a traditional breakfast that includes El Khlea tagine (dried beef with eggs), broad bean soup, and a wide assortment of breads.

Chez Lamine Hadj Mustapha
Derb Semmarine, Marrakech 40000, Morocco
Hadj Mustapha’s food stall is legend in Merrach. Located in the so-called Mechoui Alley behind The Alhambra restaurant in Jemaa el-Fnaa, Chez Lamine has been in operation for over a century. Every day at lunch Mustapha carves up to 40 lambs, slow-cooked in their underground oven

Chez Boudrigua
Stall no. 123 in the square of the Medina
Amongst the tangle of souks within the Medina, stand number 123 serves up bowl after bowl of harira, a spicy and hearty vegetable and lentil soup that’s a staple of Morrocan cuisine. After dinner, Dave and Chrissy venture off to find some chebakia, a traditional Morrocan cookie made with sesame.

Le Grande Cafe de La Poste
Angle Boulevard el Mansour Eddahbi et Avenue Imam، Marrakesh 40000, Morocco
This café preserves the style of the 1920s. Chrissy and Dave sit down for drinks with a local guide to talk about the history of Morocco and Marrakech.

“There is actually nothing I wouldn’t eat, or wouldn’t drink, or wouldn’t try. If the person okayed it, I would eat a human.” – Chrissy

“Ultimately what Chrissy tries to promote is all the things I believe in, openness, deliciousness, trying to be a good parent. That’s just who she is.” – Dave

“There is no other place in Africa, or the World quite frankly, like Morocco.” – Dave

“I don’t know, when you come here, you just feel more special than you do anywhere else in the world.” – Chrissy

“Someone just cooking one thing and giving it to you is as simple and difficult as humanly possible because there is no bullshit if it’s not good you are fucked.” – Dave on Hadj Mustapha’s Lamb