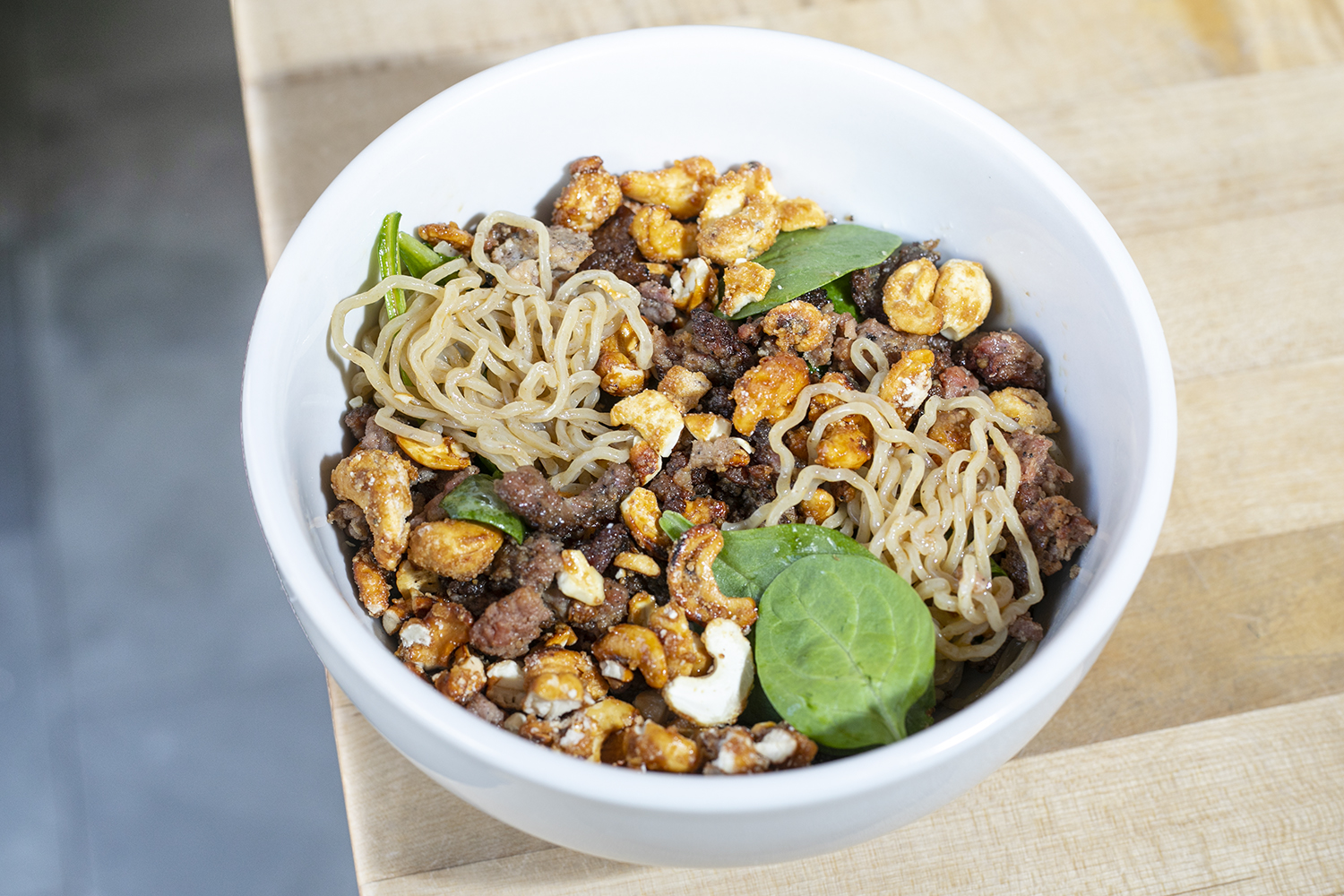 You might say Noodle Bar was handicapped from the very beginning. It could never be the world’s best spot for the noodles. It still isn’t.

Dave spent some time in Japan in his 20s. When he set out to open Noodle Bar, he knew he’d never beat the very best Japanese noodle chefs on technique. He also knew he could never beat them with their own ingredients. So, he did one of the only things he thought he could do—he decided to take their techniques, as best as he could, and combine them with ingredients he could get locally and in the U.S. That’s why Momofuku Ramen always had bacon in it. Dave couldn’t find quality katsuobushi for dashi, so he subbed in Benton’s bacon instead.

As the restaurant continued, the team tried as best as they could to continue this tradition. The Chilled Spicy Noodles were born because the team wanted to serve a version of Dan Dan Noodles, a Sichuan dish made with minced pork, peanuts, and scallions puddled in chili oil with noodles and Sichuan peppers. It can be a soup, but it’s more often a dry noodle.

Chilled Spicy Noodles were first created by Chef Kevin Pemoulie, one of the original Chefs de Cuisine in the then-new Noodle Bar location at 171 First Ave. To get to the recipe he first asked, what are the elements and flavors that people really love in dan dan noodles? The answer: everything, really. He knew he’d need to recreate most aspects of the dish, but using his own ingredients.

In place of the ground pork, he added a Sichuan sausage the team made in house. In place of the peanuts, he added cashews and decided early on to candy them, to help cut some of the heat. The scallions were the trickiest part. At the time, Noodle Bar had a lot of dishes with scallions—the Momofuku Ramen, the Ginger Scallion Noodles. He wanted something else for this dish, but he still needed to cut the oil with something fresh. Baby spinach, which he could pick up from the Union Square Greenmarket, became the obvious choice. It was something he could add in place of the scallions and still give the dish that same feel.

Noodle Bar’s—and Momofuku’s, really—core principle has always been to keep improving. It’s no surprise that the Chilled Spicy Noodles have continued to change. We started pureeing the spinach. In the original version of the dish with the whole spinach leaves, it was more difficult to get the right bite every time. By pureeing the spinach with the chili oil, the sauce coated everything and acted as an adhesive so the sausage and the cashews stuck to the noodles. It made it much easier to get every flavor in one bite, which is really what you need with dish for it to taste balanced.

Then, in 2018 when we were opening Noodle Bar Columbus Circle, we knew we wanted to change things up again, create something new for the new space. We decided to serve another Chilled Spicy Noodle, but we wanted to reinvent it with more inspirations from some of the team’s Korean background. The Mixed Spicy Noodles at Columbus Circle continues the conversation started by Chilled Spicy in the East Village, but it draws more inspiration from bibim guksu, a Korean chilled noodle made with gochujang. We top it with a fried egg, which is also how bibim guksu is often served, to add contrast between hot and cold to the dish.

In Toronto, Chef Hans Vogels has served various versions of the original Chilled Spicy Noodle over the years. He’s recently been experimenting with whole wagyu cows from a friend of his at Otter Creek Farm. He’s serving the beef in a variety of ways, but most recently, he’s been using it to make a Sichuan beef sausage for the Chilled Spicy Noodles in place of the pork sausage from the original.