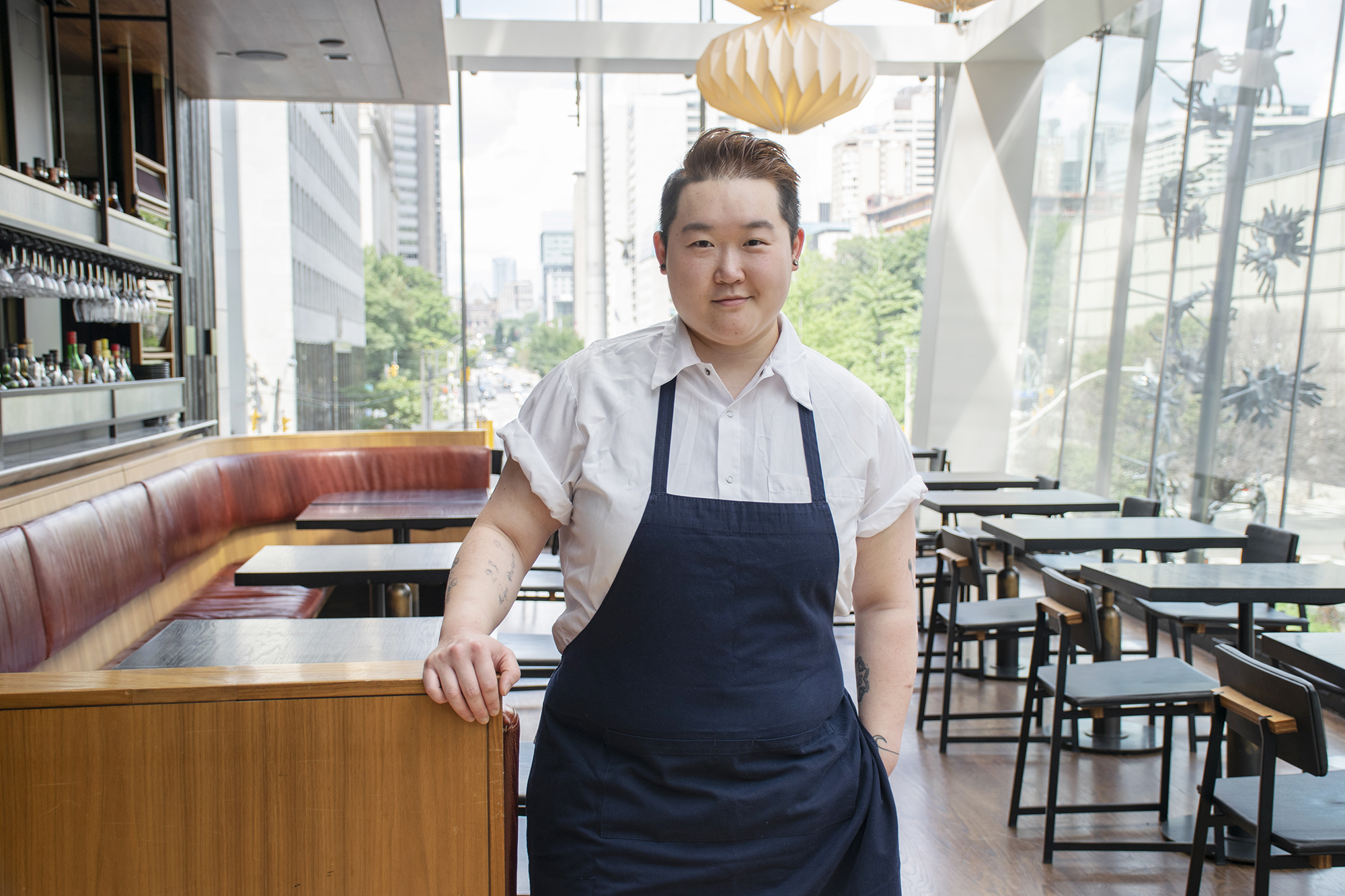 Eva Chin is the new Chef de Cuisine at Kōjin in Toronto. She grew up on her grandmother’s farm in Kahuku, where she learned to cook food in “earth ovens” called imu, using weathered volcanic rocks as embers. In the years since, she’s spent time cooking in kitchens all over the world—from Japan to Norway to Australia. At Kōjin she hopes to tie in cuisine, community, and culture. Read more about her journey and where she hopes to go in the future.

Where is your family from?
My heritage is Samoan, Singaporean, and Chinese. My dad is a third-generation Singaporean-American. After a tough upbringing, he went to Hong Kong for a better life. That’s where he studied hard and got himself a full scholarship to live in America. My mom is Samoan-Hawaiian. My mom left the island for New York City, and she pretty much never looked back. That’s where she met my dad.

My dad worked in foreign service, and my parents constantly reminded me to be the best of the best and to study really hard so I wouldn’t ever have to have “rough hands.” But then my grandmother, tūtū, fought for me and my siblings to be raised in Hawaii because she wanted us to have that experience. Everything she taught us involved touching things with our bare hands on our family farm. She was a huge influence on my life.

How so?
Tūtū always believed in communicating with nature as much as nature is communicating with us. Something she always said was, “Look around you, we’re connected to everything.” I really miss her a lot. She’s the first person I came out to. I was like 3, and I told her I had something weird to share. I said, “When we were watching Aladdin, I really wanted to kiss princess Jasmine not Aladdin.” And she said, “Oh, you have a māhū spirit.” Māhū are people who, in traditional spiritual and social roles, feel like they can carry the strength of both sexes. She always said, “Be who you are. Live your life. Don’t apologize.”

She also taught me so much about cooking from her experience working in sushi restaurants on the island.

Tell us more about her cooking.
She always said, “I’m just a food handler.” She harvested and farmed her own vegetables. She fished. She learned from many of the original Japanese chefs that resided in Hawaii. She was one of the few first non-Japanese women to rock the sushi scene on the island. She taught me all the basics.

Like what?
A lot of knife skills. And at a young age, I was roasting seaweed and cooking rice for her. She always said that everything we cook is dead. The moment you take a mango out of that tree, it’s dead. You took the life out of it. The moment you harvest that corn, it’s dead. The moment you cook that fish, it’s dead. And I thought, okay that’s pretty depressing. And she said, “Well, what makes it alive?” and I said, “Your skill?” She responded, “No, we make our food alive with our memories.”

I carry that with me whenever I cook.

What’s your favourite memory of your tūtū’s cooking?
There are so many memories I have of her. One time she brought home a beautiful, fresh salmon. It wasn’t very common in Hawaii back in the day. I just remember thinking—wow, look at this beautiful pink fish. She worked with salmon in sushi restaurants but to actually cook it at home—to inspect every part of it—genuinely excited her.

She said, “You know what this would be good in? Dumplings.” So she took the belly, roasted it over the grill and flaked it. Then she mixed it with green onions, black pepper, and chilies. That was one of my favourite dumplings from tūtū, even if it wasn’t very traditional. I was just a kid, watching her whole thought process. It always reminds me that if something tastes good, do something about it. Don’t let that go.

Did you do something about it?
I’ve always worked in kitchens—from high school through college. Cooking was so natural for me that doing an 8-hour shift while cramming for finals didn’t actually feel like work. The day I graduated from college I had a job offer, but I wasn’t ready to be tied down to a desk. I didn’t even show up to my own graduation party. By the time I was missed, I was already on a plane to Japan.

Tūtū gave me her blessing. “Go and see the world,” she said. “Do not come back until you think you’re ready. Go heal yourself.” So I did.

So you landed in Japan. Then what?
I knocked on a couple of doors and got a gig immediately as a dishwasher, and I worked my way up in a restaurant for a year and a half. Then, I was ready to go to Europe. It didn’t hit me until I was midway through my trip that I was like, “Wow, I want to cook”.

Why?
During my stage at Maaemo, the intensity of the atmosphere and the team pushed me, and I saw myself transform. I immediately realized that is what I wanted in life. One day it just clicked. From that point, everything I did in my life was simply just to be better at this skill and at this craft.

So how’d you make your way to Canada?
I went to Vancouver for a friend’s wedding, missed my flight, and never looked back. I fell in love with the Pacific Northwest lifestyle and everyone’s love of nature there. I said to myself, “I am home.”

And then you became the Chef de Cuisine at Kōjin.
Yep. I got on a plane, landed in Toronto, and came straight to Kōjin. When I got here, I met Steve, my Sous Chef, and there was an immediate connection—from cooking styles, to what we value, to what is important to us about food.

At Kōjin, how have you been playing with fire?
All oceanic islands have “earth ovens.” In Hawaii, it’s called an imu and in Samoa, it’s called ‘umu. The object is to cook almost anything in a hot oven made in the ground with puka—weathered volcanic rocks filled with air pockets.

Before I learned how to light the imu, I was in charge of sourcing puka with my brother. We’d drive his Jeep Wrangler to the bottom of a volcano, and we’d choose rocks. When we got back, he’d put me in charge of shovelling out a pit in the ground. We’d wrap food in little chicken fence wires or in banana leaves. Then, we’d put it in the ground, light the kiawe branches with the puka, which has air pockets that create steam. Once the kiawe wood burns off, the puka becomes red hot. It’s ready for piling on banana and taro leaves. Low and slow is the key—sometimes it takes up to 15 hours.

When it’s done, you’d feed your lūʻau by collecting the food, either sitting at a big table or sitting in a large circle.

How’s this concept being incorporated at Kōjin now?
A lot of vegetables here are cooked by burying them in embers. By cooking on the charcoal hearth it has the same smouldering, slow-burn effect as an imu. Charcoal resembles the same quality of volcanic rocks that I’m used to.

How does your journey translate on your menu?
I want to convey where I’ve been, who I am now, and where I want to go. I was born in a broken divide of culture, racism, and classism in both Hawaii and in my family. The term I use for who I am is hapa because I was constantly reminded throughout my childhood that I wasn’t fully Chinese or Hawaiian. I was always reminded of my otherness. That’s reflected in my cooking, like with the Fire Roasted 1/2 Chicken. The cuisine draws from peranakan cuisine. That’s why I put turmeric in the rice.

So now that you’re here, what’s next?
I’d like to create a legacy for hapa food because that’s what I am—Half Pacific Islander. Just like in America, I think Canada also thrives on ethnic and immigrant cultures to shine through cuisine. That’s what I hope to do at Kōjin.

Book a reservation at Kōjin.